May 15, 2014       How It Works
Greek Heavy Infantry Tactics
How Ancient Armies REALLY Fought...
You've seen 2 comic book movies now, each showing how skillful the ancient Greek warrior supposedly fought in field combat.  Were they really such incredible warriors that one Greek hoplite could wade through 10 Persian veteran swordsmen, with barely a sweeping red cloak on him, his shield and short sword, and cut the enemy to pieces like in the 300 movie?
Comic Book movies never fail to exaggerate their characters so that they become larger than life superheroes, whether they have superhuman powers or not.
In the first 300, the director accurately depicted the Greek phanlanx in the initial combat sequence as a turtle-style unit before turning the fight scene into a riot.
Supposedly highly disciplined Greek heroes suddenly break formation in the heat of combat, or even at the start of a clash and do incredible havoc individually on hordes of hapless scimitarred Persians.  Greek hoplites each like a 14-year-old bully making a massacre of whole schools of kindergarten swordsmen. Even the hero uses his stabbing spear as a javelin against the enemy in the heat of combat, a no-no for actual Greek heavy infantry tactics.  Also this is rather difficult to do for real because of the sheer weight of a 9-foot doru spear compared with the lighter javelin.  But in a comic book movie, for dramatic effect, it looks sooooo amazing. Woop-de-doo for Comics! 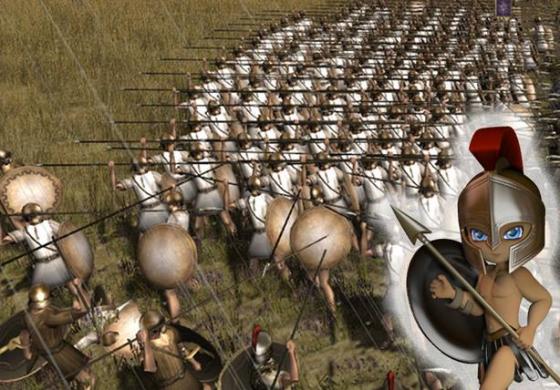 Ancient Greek warriors were citizen-soldiers, except for the professional army of Sparta.  Warfare among Greek city-states was a seasonally scheduled event to allow for soldier farmers to tend to their farms. Only after the harvest had been brought in from the fields would the Greeks fight.
The Hoplite and his Shield

The Greek warriors were called hoplites, named for their heavy, bronze covered shield ( 3 to 3.5 feet in diameter, up to 25 pounds heavy and protecting their chin to knee when shouldered )
The rounded shape of the hoplon was revolutionary for its time, allowing the shield to be rested on the warrior's shoulder for additional support even as the hoplite secured the shield by its  grip and forearm straps. 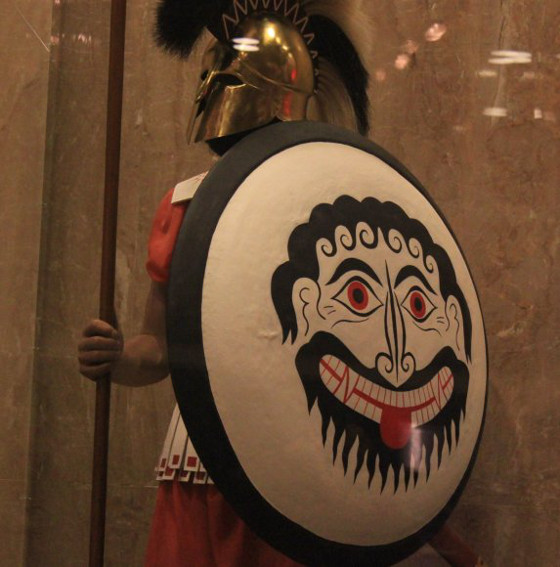 As an offensive manuever, Hoplites would bash their heavy shields into the enemy in close quarters combat to push them off balance or break opposing formations as they stab with spear or short sword.
The Greek Phalanx

Ancient armies clashed on the field as groups of warrior formations.  The Persians fancied themselves as the most skilled swordsmen of their time and terrorized other nations by sheer numbers and bribery if it were more effective in turning the enemy.  The terrain around Greece made fighting using cavalry and chariots less effective.  The Greeks focused instead on heavy infantry tactics and their intense internal warfare enabled them to innovate on field combat tactics on very rough, uneven terrain.
The phalanx formation of the Greeks was a fighting group of 4 to 16 men deep, and lined up to 50 rows for special situations. It was the backbone of their heavy infantry warfare.  In this combat formation, Greek warriors overlapped their shields cover the right side of the comrade on their left, protecting men on the line and forming a shield wall for every line of fighting men.
The phalanx was also bristling with rows of spear armed hoplites. The first two rows of the heavy infantry unit would run through an opponent with stabbing spears that extended from between their shields. The most seasoned and skillful fighters were always stationed in the front ranks of the phalanx, while the newer recruits were stationed in the back rows as support along with aging veterans to aid the new warriors and show them the ropes. 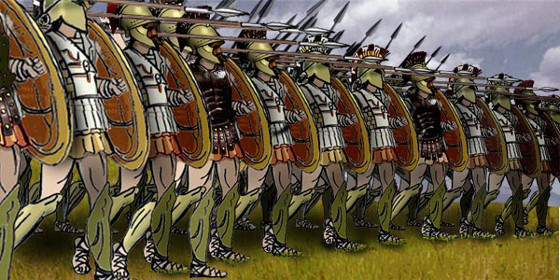 The first three rows, or ranks, of a phalanx would engage their opponents, while the back ranks would brace the front rows to prevent the front rows from sagging back or retreating and just keeping the formation intact, replacing any fallen comrade in the rows upfront with man from the row behind.
Battle-hardened Spartan veterans were armored from head to toe and were not just buff dandies in red capes.  The richer upper-class Spartan hoplites wore the best armor they could put together: bronze breastplates (up to 50 to 60 pounds heavy), a bronze helmet and greaves for their shins.
Greek hoplites who could not afford such accoutrements settled for linothorax armor: stitched and laminated linen fabrics that were  reinforced with bronze scales or animal skins.

To strike at the enemy, hoplites were armed with long spears, called doru (ranging from 7 to 9 feet long ) held in their right hands and their shields strapped to their left.
Greek hoplites used both underhand and overhand grips, depending on the situation (back row overhand strike or front line underhand strike) in stabbing at their opponents. The rear rows held their spears in an underarm grip, and raising them upwards at an angle for cover and extra defense against incoming missiles hitting the fighting line.
Aside from the spearheads, the Doru had a spiked point, called a sauroter, at the opposite end. If the spearhead broke in battle, the hoplite would spin the other end around.  It also helped in standing the spear up by planting the spiked end into the ground.  Sauroter is Greek for "lizard killer" because it is used by the back ranks to finish wounded enemies as the phalanx march and advance on keeping their spears in the upright position. It is also used as a counter weight, balancing out the spearhead of the doru.
If the spear got snapped or was lost in the heat of battle, the Greek hoplite would switch to the xiphos as a secondary weapon, a short sword with a 2-foot blade; some even as short as a foot long.  The shorter weapon was advantageous in close quarters at the front row when two phalanxes clashed. With no room to wield a longer sword, the shorter blade could be stabbed, in any unguarded moment of the opposing shieldwall, into an enemy soldier's unprotected body parts. The xiphos was also helpful when a hoplite needed to chase down the wounded and rout stragglers, dropping his heavy spear and shield and break ranks, usually in the aftermath of a clash.
Greek Light Infantry

The phalanx was very slow to manuever and advance, so it needed support troops to protect and aid it in field combat when other elements threatened a flank or when the enemy had the advantage of ranged weapons.  Skirmishers or light infantry mercenary allies protected the vulnerable flanks and rear.  Peltast warfare fluorished in Thrace while the Greeks focused on developing heavy infantry almost exclusively.

Many were hired from outlying regions of Greece. Thrace had the deadliest peltasts,  Crete had seasoned archers and the Beleric Islands and Rhodes offered the nastiest slingers.  During and after the Peloponnesian War, use of light infantry became more common to the point tha a force of 600 Spartan hoplites were routed using hit and run peltast tactics.

Hoplite and phalanx tactics reached their most effective and successful combat field test when the smaller Greek armies defeated two massive Persian invasions (499-448 BC). Hoplite formations withstood a horde of lightly armored Persian infantry in the famous battles of Marathon (490 BC) and Thermopylae (480 BC) protecting Greece and democracy from Persian autocracy.
In Battle of Thermopylae, the Greeks sent 300 men to defend a narrow mountain pass against a numerically superior Persian army which would have routed the Greeks in open field combat.
The Greek phalanx relies so much on disciplined heavy infantry combat tactics that no hoplite warrior EVER breaks formation at the beginning of combat nor in the heat of battle or the fighting line will be broken and overrun.  Heavy spear weapons are never thrown at the enemy for a more spectacular kill.
Nor were the Greeks the superior individual man-at-arms, swordmasters depicted in the 300 movies.  ( Because in real life, no single fighter armed with a blade, can survive rushing into a ready and waiting number of skilled enemy swordsmen without getting a mortal wound).  Only in the movies folks.
It was their intense group disicpline and coordinated and collective fighting in the phalanx formation that made Greek heavy infantry the elite combat unit it was during ancient times.  No horde of superior Persian swordsmen could manhandle that easily.

During the internal strife of the Greek city-states, Theban general Epaminondas even improved phalanx tactical manuevers. Defying prevailing wisdom at the time, he stacked the left flank of the phalanx to an unconventional depth of 50 ranks, at the expense of the center and the right.
An asymmetric formation were the center and right, both staggered backwards from the massed left flank and away from the enemies.
Called the 'echelon' formation, it allowed the phalanx to move forward obliquely. In a clash with Sparta, the Theban left wing decidedly crushed elite Spartan forces on the allied right, while the Theban center and left trailed behind and avoided engagement. The trick was in luring the opposing enemy phalanx line into breaking formation by trying to catch up with the feint of the Theban center and right while the left side of the Thebes overwhelmed and routed the enemy.
It is one of the first known examples of both the tactic of local concentration of force, and a method of 'refusing a flank.'
Alexander the Great of Macedonia, adopting Greek heavy infantry tactics, increased the length of the spears in his own army, and used the heavier phalanx to pin down opposing forces while his elite cavalry hit the flanks and rear.

The next time you see ancient Greek hoplites break formation and  fight like superhuman samurai warriors, smile.  Pop in more popcorn and cheer the top cheesy.  If that could actually happen in real life it would be as sons of gods of their pantheon, in the epic adventure and quests of Greek mythology ( and somewhat implied in the Bible, men of renown were sons of angels ).  Still makes for a good Comic Book Movie, and that should always be good no matter what.
ancient greeks, greek hoplite, hoplon, heavy infantry tactics, phalanx, phalanx formations, greek army, comic book movie, 300 the movie, king leonidas, spartan warriors