An Electric Sun and Universe? 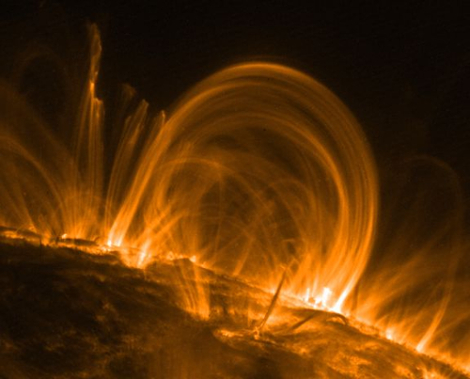 Solar flares erupt when magnetic fields are broken
and matter is ejected.

Mankind has been taught that the sun is a light-producing, heavenly body fueled by an internal nuclear fusion core.  A 1972 article by Ralph Juergens, inspired by a Immanuel Velikovsky's 1946 monograph offers a different theory:  The sun is actually an electromagnetic gas-plasma phenomenon with plenty of electric field activity on its surface creating coronas, solar winds and coronal mass ejections from collapsing  magnetic fields.  The Electric Sun theory became a controversial and eye-opening hypothesis because most of its explanations for observable sun activity-from the solar corona to solar flares and sunspots can easily be explained and defined in known and proven electrothermal dynamics.


Video Credit: Scott Vigil
Explanation of the Sun as a giant battery powered externally
like Tesla's own electricity theories.

If the standard model were correct, heat and light from a nuclear fusion core would simply radiate away from the photosphere as from a hot stove and not travel at speeds of light and faster as if riding a vast field of electric currents in space.  Traditional astrophysicists have scoffed at the Electric Sun theory in favor of their own quantum Standard Theory of the universe but the Electric Sun theory is fast gaining ground even among the best scientists--others who have continued to research and promote the Electric Sun theory include Wallace Thornhill with his Thunderbolts Project website and You Tube channel.

The Electric Sun theory is even being endorsed by alternate lifestyle communities like Michael Tellinger's  Ubuntu Group.

"The known characteristics of the interplanetary medium suggest not only that the sun and the planets are electrically charged, but that the sun itself is the focus of a cosmic electric discharge -- the probable source of all its radiant energy." 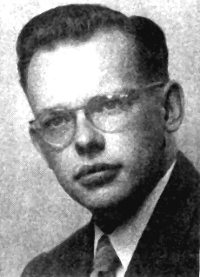 Juergens was inspired by Immanuel Velikovsky's contention that electromagnetic forces may have played a crucial role in sculpting the surfaces and shaping the orbits of the bodies of the solar system and by Charles Bruce explaining in volumes of scientific papers that phenomena observed in stellar atmospheres could be more accurately described by an electrical discharge model--from light generation (solar corona) to solar flares, to heat radiation that does not dissipate significantly over vast distances if the sun model were a nuclear fusion astrophysics model.

In 1984, Juergens was branded as a cosmic heretic by other scientists for controversially discrediting the thermonuclear theory of the Sun in favor of an electricity powered theoretical model.


The Basics of Electric Sun:  Enigmas in Review

The Sun is at the center of a plasma cell, called the heliosphere, that stretches far out - several times the radius of Pluto. As of October 2012, the radius of this plasma cell has been measured to be greater than 18 billion km or 122 times the distance from the Sun to Earth. 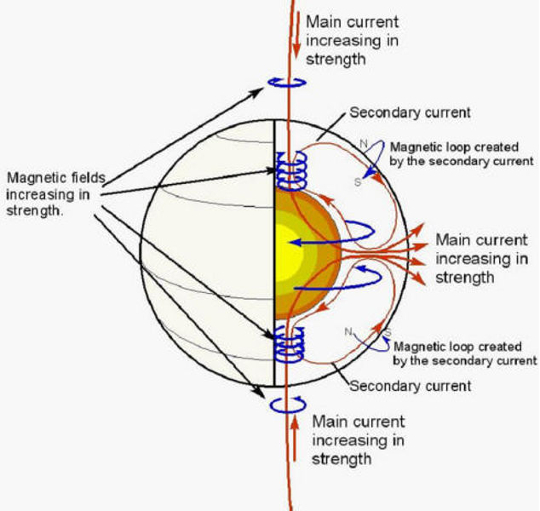 How the sun works as a giant capacitor or battery powered by an
endless electric field with currents from other stars.

In the Electric Sun theory, our Sun may be externally powered by its galactic environment, a huge electric field not far from Nikola Tesla's own theories on electricity and infinite power.  In the Electric Universe model, cosmic sized, low-density currents create the galaxies and the stars within those galaxies by the electromagnetic pinching.

Galactic currents are of low current density, but, because stars are like gigantic capacitors, the total current increases--explaining why the sun has fluctuating energy levels as it travels around the galactic center---the Solar System encounters regions of higher or lower current density depending on the ambient power put out by nearby star systems  which make solar activity spike via sun cycles as well as randomly.

The Sun's corona is visible only during solar eclipses, a vast luminous plasma glow that changes shape with time - always remaining fairly smooth and distributed in its inner regions, and showing filamentary spikes and points in its outer fringes.  It is a 'glow' mode plasma discharge. If the Sun were not electrical in nature this corona would not exist. 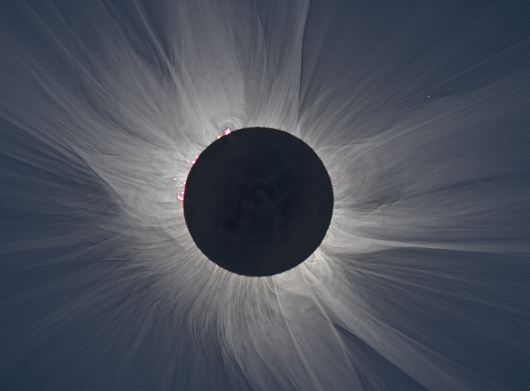 Image Credit:  NASA
The appearance of a visible radiating solar corona in the
same manner as electric current from the sun can only be
explained well by the laws of electromagnetism--and not
by a nuclear fusion sun theory.

If the Sun is simply a (non-electrical) nuclear furnace, there wouldn't be a visible corona there at all in a fusion-only model nor can such models explain its existence.

Continued acceleration of the solar wind out past the inner planets, implying an extensive electric field acting on the particles long after they have departed the Sun—outer space according to the Electric Sun theory is a vast electric field.

When magnetic fields collapse due to the interruption of the currents that produce them, they do not "break" or "merge" and "recombine" as proposed by groping astrophycisits trying to figure out how to fit the standard model to the sun's phenomena.  In the study of electrodynamics and the behavior of magnetic fields the field simply collapses (instantly).  On the Sun, a collapsing magnetic field can release a tremendous amount of energy, and matter is ejected away from the surface like any explosive rapid reaction.  This is the simplest  explanation for solar flares.al Mass Ejections (CMEs) occur.

Coronal mass ejections achieving speeds up to one quarter the speed of light travel at velocities that theoretically can be only possible  in an electric field—aka space is one giant electric field with currents and circuits.

The sun is cooler at the surface (approx. 5,000K,) but its temperature rises through the chromosphere and into the corona (outer corona temperatures up to 20 million degrees) indicating a plasma double layer- between the Sun and its extended plasma atmosphere.  The potential energy of Ions get excited from the drift current towards space and get agitated to increase kinetic energy thus increasing energy and heat released.

The sun has  polar jets, a classical feature of electric discharge in plasma electricity fields.

The equatorial torus--super-rotation of the equatorial atmosphere that is 35 rotations for every 26 rotations of the circumpolar atmosphere--is a contradiction of standard atmospherics but can be easily explained by the electrical bombardment of the sun--magnetized sphere--by cosmic waves from space because space is a giant electric field itself.  The torus is a predictable effect if the corona is being driven by external, rotating cylindrical currents along the Sun’s axis, pinching down to meet the solar surface.


Video Credit:  ThunderboltsProject  You Tube
The NASA IBEX and Voyager 1 project have revealed a previously unknown
galactic magnetic field that may be powering the sun.

Evidence is overwhelming that a majority of the phenomena we observe on the Sun are fundamentally electrical in nature just like Nikola Tesla's theories on infinite power put together.  It is only a matter of time before astrophysicists finally resolve the theory of the Electric Universe from data coming from NASA projects like IBEX and Voyager 1.