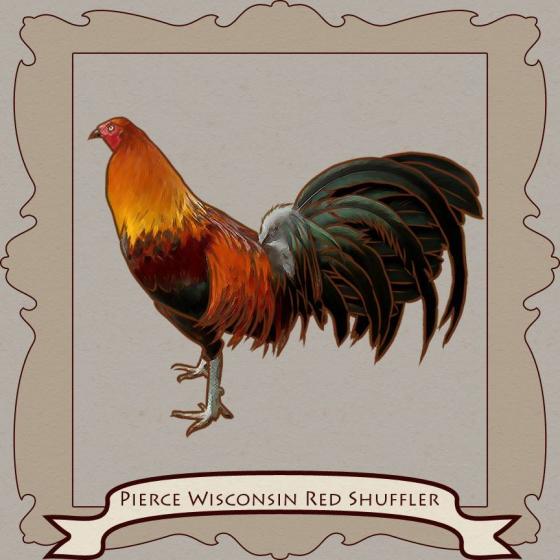 Bloodline History
In 1887 Dudley Pierce bought a stag and two pullets from Mr. F. W. McDougall of Indianapolis.  The stag was a deep red with a very dark face, the pullets very dark brown bodies with red hackles.

In 1889, Dudley decided to purchase more gamefowl and visited Col. G. Perk Huddleston, of Lebanon, Tenn.  Dudley was very keen on Huddleston's Cork Irish, and finally persuaded the old gentleman to let him have the cock for thirty dollars.  Dudley brought this cock home with several others and mated him with the two McDougal New Mack hens.  This cross was the original foundation of Wisconsin Red Shufflers.  He fought them against some locals and won handily.

The following season Dudley bred the New Mack stag that he purchased from McDougal over the three half Seven Strain Inside Red, half Cork Irish hens from Huddleston and again got amazing fighters in the pit.  Asking Mr. Charles Fose what he should call them,  Mr. Fose replied, "Call them Wisconsin Red Shufflers."

Then in 1892 Dudley purchased a Denny Mahoney Gull cock, a black breasted red with red eyes and a willow green leg, and this cock was bred into a yard of hens from the McDougal-Cork Irish mating. Those crosses produced wheaten colored pullets and some stags that were black-reds and looked very much like the old original Mahoney Gull cock.  Dudley fought one of the lighter colored stags with just 1/4 of the Mahoney Gull blood, and they always proved accurate hitters and hard fighters so Dudley kept them as part of his broodstock.

Only a small amount of the Gull blood was in Pierce\'s fowl, nevertheless, it was sufficient and strong enough to produce many throwbacks, like or very near like the old Mahoney Gull cock.

Pierce Wisconsin Red Shufflers are popular for being deadly when cornered, capable of making the killing blow from any angle, in the air or on the ground.  They were very game and relentless fighters and were popular because they never let up even when cornered, often stealing a come-from-behind win against better odds.