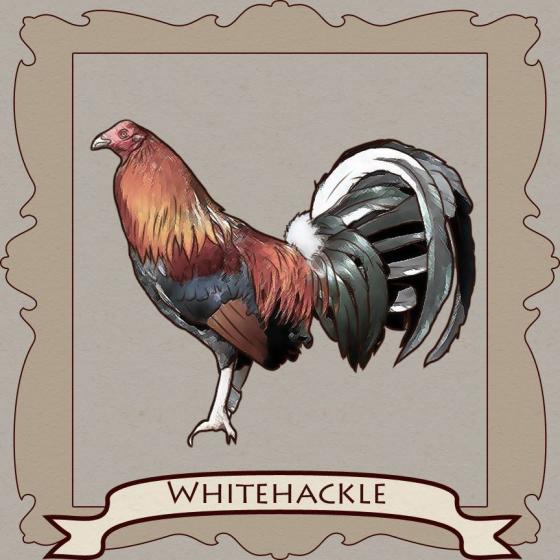 Col. William Morgan of East Orange, New Jersey bred and fought some of the best Whitehackles as a pure stock gamefowl, which were pure Gilkerson cocks sourced from North Britain.
In 1858, George Gilkerson, an English farmer living in Cortland County, NY, imported some fowl from Cumberland, England from a man named Lawman a relative of Billy Lawman of New York State.  Called North Britain at first and later known as Gilkerson Whitehackles.
The North Britain gamefowl were duckwing red, brown red and pyle.  Before his death, Gilkerson gave many of his fowl to Col. Morgan, among them a little imported Scottish hen, maybe a Lawman, which Gilkerson prized most highly.  Col. Morgan bred this hen with the old Gilkerson fowl and her blood is in all the strains of Whitehackle he created.  The Morgan Whitehackle became more famous than the Gilkerson fowl, winning against Kearney, the Eslins, Mahoney in the Pennsylvania coal mining district.
Morgan only infused two outcrosses into his strain of Whitehackle pure bloods.  Morgan got a ginger hen from Perry Baldwin, and put her in the yard of Sonny Stone of Newark.  Stone bred her, her grand-daughters and great grand-daughters with the Morgan cocks.
The Whitehackles resulting from the mix, had the bloody heel and fighting ability of the pure Morgan's as well as the aggressiveness of the ginger [newbold fowl].  Morgan then took a fifteen-sixteenth Morgan and a sixteenth (Ginger) newbold hen from Stone, and bred her on his own gamefarm.  John Hoy of Albany purchased gamefowl from Billy Lawman, and he and Morgan exchanged broodcocks freely, so the Whitehackle was continued as a pure strain.
Morgan bred the Lawman Whitehackle, reduced to one quarter in his own farm.  In the early nineties Morgan gave a small pen of his fowl to a Colonel in Virginia.  The colonel inbred the fowl and when he died, the Whitehackles became the roosters of a professor at Georgetown university, who knew nothing about breeding or cock fighting, but he kept the stock pure.  Neither the pure Morgan Whithackle or inbred birds have changed in twenty-five years.

Mr. Murphy was a very private cocker who considered his affairs his own business and saw no reason to discuss them with anyone.  The gamefowl he bred showed the most consistently uniform fowl ever seen in New York main cocking events.  He lost his fair share, but he won a majority of the mains he competed in, winning forty-nine stag mains according to a cocker who followed his gamefowl career.
Mr. Murphy was part owner of Schley and company, a large brokerage firm.  Born in Long Island, New York, he began working around the harness horse track near his home by the time he was 14.   He became a close colleague of the horse racers, who were active traders in the NY stock market, and they gave Mr. Murphy tips on investing in the market, where he made good money.  Many of the Horsemen at that time were crazy about cockfighting.  Murphy was attracted by the winnings of the sport and cocking was already in full swing around New York City.
At one time three or four horses owners he jockeyed for in Syracuse, New York, had a current account of $100,000 in the bank, from which Murphy could withdraw any time if he saw a good horse that could breed well with his horse patrons.  Mr. Murphy could have gotten any proven bloodline he desired to start his gamefarm but his independent nature led him to raise his own bloodline and he didn't want anyone to know what they were, or where they came from.   No one ever knew how he started his bloodlines and he just purchased whatever fowl he wished to start breeding cocks.
Nick Downes, an old Irish man who worked for him for 30 years, claimed Murphy fowl were Lawman Whitehackles. John Hoy, a great cocker around 1900 until his death in 1929, work for Murphy for seven years as a feeder and, Hoy was associated with Billy lawman and had the Lawman Whitehackles and Muffs. He took some of the fowl to Murphies place and a great many of the a more breed, raised and fought by and for Murphy. And, after hoy left Murphy, some of the fowl remained. They were the fowl Murphy continued to raise and fight.
The Murphy fowl were very uniform in every way, looks, fighting style and gameness. They were sort of a rusty red with white in wings and tail, call straight comb and all yellow legs and beaks.

Another modern breeder who developed this bloodline is Steve Sturm.
The Kearny Whitehackle is 100% straight comb. Whitehackle cocks come as yellow-legged, or green-legged (Chesapeak) and also spangled.  The Whitehackle is still considered as the most beautiful gamecock, the breed most recognized as top dog Whitehackle was the strain developed by Mr. Michael Kearney in 1871.
Breeders who Swear by the Whitehackle

Jesse Horta, a very smart gamefowl breeder, said that in order to win in today's competition, you should have bloodlines that can kill Sweaters.  The current reigning champion of the pit throughout the Philippines is the Sweater, its swarming attack always overwhelming all comers after the last infusion by Carol Nesmith enabled a bird that once lost steam in a long fight due to its relentless attacks to sustain a fight until its opponent gave up the ghost.  Because of this, almost all cockers in the country have Sweaters as part of their broodstock.  Jesse

Curt Langston, another cocker who was lucky to get original stock from Floyd Gurley himself in the 90s, before the old man retired.  Both exchanged ideas on how to cross and raise the Whitehackle for better fighters.  Mr. Langston chose to breed with Oriental fowl, and the outcome helped him win 13 straight fights in long knife in his outing with the Whitehackle hybrid crosses years ago and recently he won 4-cock derby using the same Kearney Whitehackle cross.

Most other Gamefarms in the Philippines that had the precious opportunity to acquire Floyd Gurley bred Kearney Whitehackles to cross with their own broodstocks, like RED GAMEFARM have had very good fight records against othewr local top cockers.

The Kearney Whitehackle is always bred as pure stock and are often crossed with the Sweaters and Roundheads for a modern pit fighter that can go head to head with any rooster.

The Whitehackle gamefowl are straight combed with red eyes and are medium stationed. While 90% are yellow red in color, the remaining 10% are spangled, mustard colored hackles. These fighters are built with broad shoulders, fairly compact and with heavy plumage, each rooster having an average weight of 2 to 2.4 kgs.  The Whitehackle is a very deadly cutter, break high and can fight in any position available due to their agility and shiftiness, on the ground and in the air.  They are strong and power hitting fighting fowl with very deep game.  Described by veteran gamefowl aficionados as a ring general, the Whitehackle fights best using the long knife slasher type.  This beautiful rooster is a very smart fighter and has accurate timing that places deliberate blows to kill its opponent.  It is also a very aggressive rooster.  Because this strain has been carefully sustained by smart breeding over the years, it is still a consistent and proven bloodline that wins big.

Floyd Gurley bred the modern version of the bird straight pure blooded stock to create a unifrom bloodline that consistently tops its opponents in the pit until today.