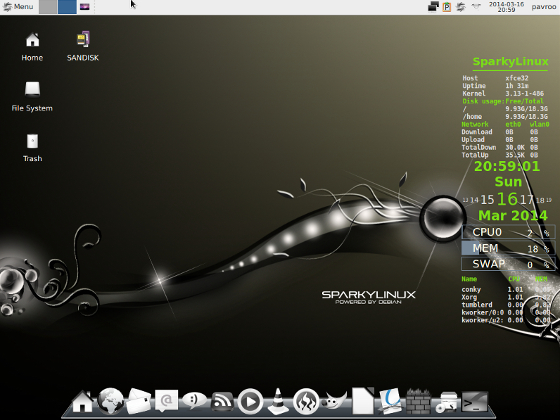 SparkyLinux, a lightweight, fast, and simple Linux distribution designed for both old and new computers that is now available at version 3.5.

Sparky is a Polish distribution, based on Debian, that runs on any of the following low-resource, desktop environments: LXDE, OpenBox, E17, MATE, Razor.  This is a review of the LXDE desktop.

Sparky boots in a snap. You go automatically online once you configure your internet settings once, whether using wi-fi or a dedicated landline connection.

The desktop has a menu bar in the lower bottom that contains all the basic app icons as fixed options for quick launch of your work app, you cycle through the menu if you want another Linux app to handle the specific task you want, like a text editor instead of LibreOffice. The top panel is not even as gorgeous as say Ubuntu Universal Edition, another popular multi-use Linux distro. Sparky might not be as stunning as Sexy KDE front ends like Kubuntu, but it gets the job done with a desktop that is still better than the paid PC software you used to work on that gets more expensive and buggy as you upgrade it, unlike any Linux distro for the PC which gets more robust, slicker, stocked with essential power apps rather than being bloated, and it still can run on older machines too. Open Source is always FREE, so look at the trade-off between FREE and everything or an OS with a paid license for each machine plus every purchasing one copy of any external compatible app that needs to be added into your system for every machine too, like the OS.

Sparky offers the reliable apt-get backend, with its own front end called APTus. Debian has a reputation taking each distro dev slow to ensure system stability and power and Sparky proves its merit. SparkyLinux may not be the first choice for multi-function, compact Linux distro, nor even the 10th when you consider what you can get for home use. Kubuntu and Universal Edition, Edubuntu and even Crunchbang are all very fined choices for Home Use Linux distro for home use, but Sparky will endear you because it runs fast even with a lot of apps open.

Sparky comes with a very flexible toolbox of solutions. Its standard multi-media apps are the best, even as add-on software on Windows. The Graphic Image Manipulation Program or GIMP is there, and so is LibreOffice. VLC for playback of media files, Audacity for audio, for all that you get a tidy arsenal that would keep a Windows user downloading for an hour or more to bolster his bare-bones OS. For navigating online you get IceWeasel, not Firefox. Less worries for Windows-type malware too. And ALL of that runs zippy on minimal resource requirements.

You manage your work using the Sparky Center as your control center, similar to what an Xfce desktop distro did not too long ago. Configuration of apps and desktop managers becomes a chore for the non-tech savvy, but you still get a tight, low resource using, powerful Linux distro running on even older machines. Sparky is easy to use, with few bugs which even if you encounter them...like all Linux OS, you still recover gracefully from almost any app bugs or crashes unlike Windows where the entire OS crashes.

Critics say it could use a prettier interface to make it the top-of-the-line choice, and maybe we will see that version come around, but for now, SparkyLinux works just fine as the coolest, Linux distro that can run on old machines and low resources, with every current powerful FREE multimedia app out there. Check it out! 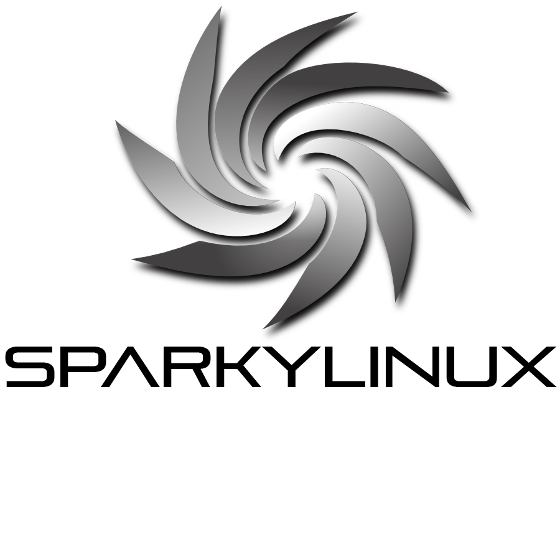