Soman Chainani, Author of The School of Good and Evil Series

REACH magazine was fortunate to get a correspondence interview with Soman Chainani, the awesome writer of The School of Good and Evil.  If everybody thought magical schools and coming-of-age stories had been done to death with J.K. Rowling and her beloved Harry Potter series, Chainani gives everybody a double-take, story-packed adventure that is as satisfying and more.

The School of Good and Evil is a tale of two, love-hate best friends--who get switched in a magical school for raising heroes and villains and the test of their friendship amidst boys (a prince who is King Arthur's son), trials of fire, the girly dreams of glam princess and goth chick, and what being a girly hero is really all about. 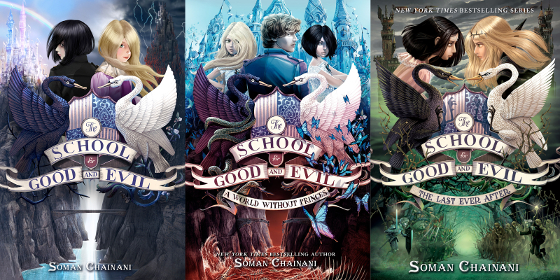 Image Credit:  HarperKids  used for review purposes
Sophie who is the glam princess, gets assigned to the School of Evil where she is shunned for being beautiful and all-princess-y.  Agatha is the goth chick, who gets assigned to the School of Good where she is despised for not being of the stereotype--she is called a witch for being dark and an introvert.
The School of Good and Evil Series has made the New York Times bestseller list for 30 weeks running and is on the top 3 of the  children's series bestselling books.  Universal Pictures has optioned rights for the movie adaptation and Soman is part of the writers tuning the screenplay for the first movie based on the first book.  Soman's book has been on Manila's National Boostore YA bestseller list for quite a time until they eventually sold out and restocked several times already.

Chainani's first novel gives kids of all ages tons of good stuff to chew on while exploring themes that may be too controversial for some "safe" children's writers: Depicting schools that distinguish good and evil yet within they breed the polar opposites. Two friends, who start out as bickering schoolbuddies trying to find their place in the teenage jungle of angst and preening, who evolve into the two people who can count on each other to do the right thing and protect their friendship from outside forces that overwhelm everyone else.

Chainani's novel series offers the chunkiest plot pack you'll want to indulge in and still get plenty of everything.  Whether you want to ape Sophie as ditzy glamrock or be shoegazer Agatha (kids today cosplay their idols), or just read a very heartwarming love story between friends hidden in a coming-of-age, fairy tale.  If you are a boy getting a kick out of reading a love triangle between two girls and a prince and don't want anybody to know you like offbeat romance too--that works too.

REACH magazine talks to Soman Chainani about his book series and his writing process.

REACH:  There are many kids, young adults and grown ups out there who want to be the next writer person to magically weave something like The School of Good and Evil.  You advocate that kids as writers try to perfect a story and build on it rather than churning out endless first drafts.  Would you still give the same advice today after finishing three-of-a-kind?  Does a perfect the story of one's own be the alternative Holy Grail now as compared to a roller-coaster journey writing several stories and hoping one makes it and tow the rest into the spotlight?

Soman:  One thing I’ve learned not only from writing my own books but talking to other authors is that there’s no single correct way to do it. Some people have to write a bad first draft (or two) before they write a good one. Some people find their best draft by planning ahead. Everyone’s different. The most important thing is to have a story to tell, and the determination to tell it.

REACH:  You've said that you write mainly what you want to read, although you do go through lengths to make the stuff accessible to the reader level and age you want the novel to strike a chord with.  Is your writing processs dependent on character empathy?  Scenarios like set pieces of cinema eye-candy?  Putting together a tale that works as good now as it will read 5 years or more down the line?  For children's story writing, is the branding--for kids of all ages--a workable motif to scale reading layers for the reader--I'm asking what stuff you put in for the 10-year-old, the 15-year-old, the new adult, and the gonzo who wants to relive being a kid in this age?

Soman:  I write whatever feels most organic to the story. I aim for a sense of timelessness in my story settings, and I do bring my experience as a screenwriter into the mix too. But empathy is always key. You can’t write it if you can’t relate on some level!  As for appealing to a range of readers, I think for the most part people just look for good stories. I keep in mind what serves the narrative and characters best. Again, it circles back to knowing what you’re doing with the story. 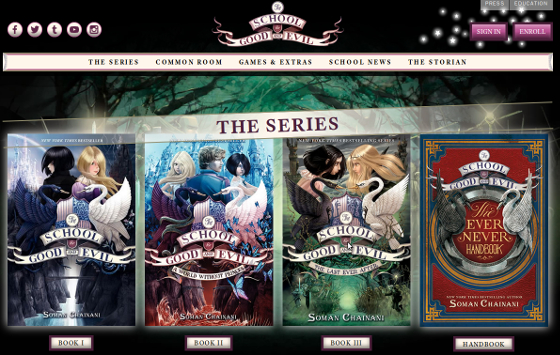 Image Credits:  schoolofgoodandevil.com
REACH:  Among the many authors, I'ver perused and also interviewed, you are one of the few who do not build from a story outline but rather write out of inspiration and see where that takes your story.  Some build their stories off images they want to see in each part of the story like say China Mieville in King Rat and Un Lun Dun.  When you do partial outlines as a skeleton to fill out, what do you gun for as a scribe?  Is it plot devices?  Character resonance?  Making setting a character of its own?

Soman:  As the conventional wisdom goes, action defines character and character drives plot. To chart out a story, I look to the characters. What do they want? How does that conflict with what they need to resolve or achieve?

REACH:  You've also mentioned in one interview that you want your stories to be packed with plot and plot resolutions that aren't predictable nor resolve in what most would find as the comfortable and familiar.  This comes off your wanting to write what you want to read and not wanting to shortchange the YA reader just to match marketing parameters for a demographic.  Also, you said you don't want the story to be irrelevant 5 years down the line if the resolution or plots were handled in a certain manner.  What makes a story ending work for you that remain timeless and enjoyable reads even when you've done your 10th novel and reread your first one.  Is it one that makes the reader think..hmmmmmm that was different, let me read it again?

Soman: The first assumption I make is that readers are smart and should never be underestimated. They also want to be entertained and engaged. With that in mind, I think of all the directions the plot can take – and then do something else. Even then, the novelty of twists wears off; it’s the characters that matter most. Their journey has to resonate with readers in order for the book to stand the test of time.


Image Credit:  HarperKids You Tube
REACH:  Are you directly having a hand in creating the book trailers for your novels?  Book trailers are so big right now that Art Schools might even be running them as course requirements for creative storytelling via digital media.  Every seasoned author or first time fiction writer can gain more marketing mileage from a gorgeous book trailer, and not just from blurbs by fave or popular genre writers endorsing your novel.  Do kids ask you about your book trailer creative process too?  As an MFA in filmmaking, what dynamics should kids and authors looking to DIY their own book trailers put into their 2-minute movie ad?

Soman:  Definitely, I’m heavily involved in the book trailer process from conception through creation. In fact, I usually begin with an idea and then assemble a team to execute it. I’ve been working with Michael Blank (who also illustrated THE EVER NEVER HANDBOOK) to produce most of the series trailers so far. In terms of others DIY-ing book trailers, it’s tough to do it on your own! I’d definitely recommend collaborating with people who have different skills and can help you translate your vision into audiovisual form.

REACH:  Can we get an image of your writer workspace, Somani?  We always ask this from out interviews with writers whenever they can accomodate our request.  Some writer spaces are neat and organized, while others are a jungle of comics and sheafs of drafts and doodles plus the occasional action figure.  What is your personal writer workspace like?  Do you write on the go--bring your work on a laptop and plug away or do you prefer settling down in your private space and work your magic?

Soman:  In general I like to work on my laptop in a quiet, private space at home. Sometimes in order to meet deadlines I’ll write on tour and I might have a few reference or research books stacked beside me, but I keep an uncluttered workspace otherwise. 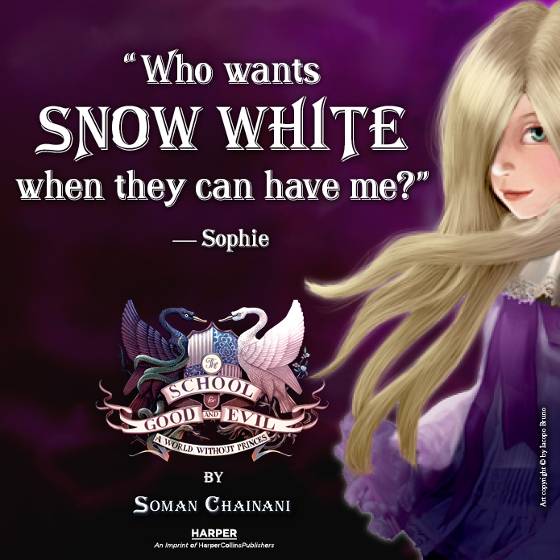 Image Credit:  HarperCollins  used for review purposes
REACH:  You mentioned Hansel and Gretel as your favorite fairy tale ever.  Will you be doing an adult retelling sometime in the future?  Neil Gaiman has recently been mining and riffing off fairy tales into more adult themes and even doing Poe stuff aka The Cask of Amontillado as the The Truth Is in a Cave in the Black Mountains.  China Mieville has riffed Moby Dick into Rail Sea and The Scar plus King Rat off the Pied Piper fairy tale.  Will you ever do a bizarro Hansel and Gretel for the 18-year-old versions of kids who grew up on The School of Good and Evil or would you write your next novel for an entirely different reading audience?  Some YA readers may also want to know if you like science fiction stories and if you'd write stories or a novel in that vein?

Soman:  I love writing for kids and I don’t see that changing – but I never rule anything out! As for the sci-fi question, I do like it and would definitely write in that genre.

REACH:  Last question, what do your think of millennials who get their own portable manual typewriters and churn out their work in public spaces?  Would you get caught in public with a portable typewriter yourself or is that too hipster for you?

Soman:  That’s not for me but if that’s the only way you can write, do whatever’s best for you!

Thank you, Somani Chainani for giving us the chance to interview you and tell our readers inspiring stuff about craft and your beautiful book series, The School of Good and Evil.  We hope more guys like you come up with riveting, subversive and insightful reading entertainment for all of us YA genre fiction fans.
meaningful life, soman chainani, the school of good and evil, fairy tale writer, ya fiction, writing process, ya bestseller, the school of good and evil movie