May 15, 2014       Unravelling Mysteries
Atlantis Is Trapped
Under Ice
Newly discovered Antarctic pyramids
as proof where Atlantis is hiding
The shocking discovery of up to three possible, ancient man-made pyramids buried under the thick ice and snow of Antarctica by an 8 man team of explorers from America and Europe indicates that there is more to the mystery of Atlantis than what legend and lore offer. Planet geography and climate might have not been as it is right now when Atlantis reigned in its heyday as the most advanced civilization on the planet. 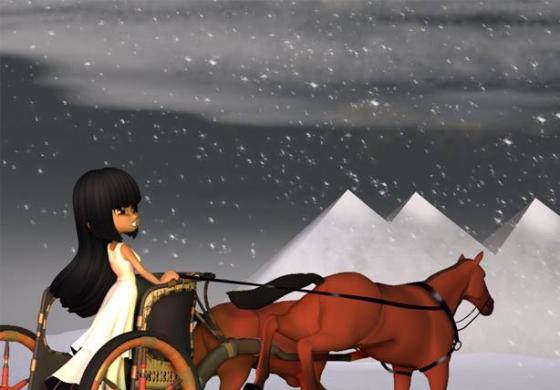 Egyptologists have long suspected that their own Sphinx statue is far older than first estimated, possibly over 10,000 years old.  Scientists discovered that evidence of water erosion on the Sphinx statue from Egyptian antiquity hint of a story of climate change from rainy hot jungle exotic nation (pre-crust slide Egypt)  to desert wasteland in a few thousand short years.  If the climate in Egypt changed this quickly, the Antarctic continent would be frozen over in a matter of a few thousand years; if the entire continent slid to the south pole from where it used to be.
Google Earth already reveals high resolution zooms of underwater city grids where ancient civilizations lived and even submerged pyramids lie in strategic locations with cris-crossing ‘roads’ or ‘tunnels’ connecting each submerged habitat at a scale as vast and as extensively superhuman; like other ‘peoples’ built them and not just our ancestors.  If the earth’s crust slid around to submerge some locations beneath the seas and move some in areas where the change in environment would drastically alter living conditions, that cataclysm would create a whole new world, literally.
At least three Medieval maps show Antarctica without an ice cap or only partially covered with ice. The precision of the 16th century cartographers was very high and their data surpassed the surveying know-how of the late Middle Ages.  The Old World maps show Antarctica when the ancient Egyptian and Sumerian civilizations were just starting out. This point of view is not validated by almost all professional historians since it cannot be verified scientifically.  Atlantis may have been located on the northern shore of the most southern continent, or archipelago: Antarctica.  Existing nations then were at a very low level of development.  Atlantean society surely preceded our civilization.
After whatever global cataclysm occurred then to change the location of land masses and geographical climates, glaciers started creeping up to their land from the polar center.  Forced out by a hostile environment, the people may have shipped out and resettled at the north-east of Africa-where Egypt lay in infancy.  The handing down of knowledge by the Atlanteans to the ancient Egyptians may also have spurred them to become one of the most advanced nations of antiquity.
Writer James Donahue speculates about the Egyptian god Thoth, the caretaker of the last of 12 great pyramids built on Egypt...a messenger who claims that the first pyramids are located under the ice in Antarctica. The others are in Tibet, Lumeria  (a legendary lost continent in the Pacific region), Atlantis, Mexico, Peru, Europe, Australia, Canada, Middle East, United States and finally Egypt.

The Antarctic pyramids are of special interest because they are purported to be a portal to other planetary systems and used like a navigation device for travel by aliens at that time in the history of Planet Earth.  Digging up Antarctica might unravel more amazing discoveries than the world is ready for.  There are secrets there that may explain everything that was before and things to come sooner than we know.  All in good time, will knowledge be revealed to the world.
atlantis in antarctica, atlantis, unravelling mysteries, pole shift, pyramids in antarctica