Home  »  How It Works  »  Trimarans and Catamarans: Why Multihulls Are the Fastest Boats in Sport Sailing

Trimarans and Catamarans: Why Multihulls Are the Fastest Boats in Sport Sailing

October 5, 2014       How It Works
CATAMARANS and TRIMARANS
The Fastest Sailboats in the World

The winning keel design for the Australia II, the winning yacht
of the 1983 America's Cup, allowing their yacht to move in low winds.

You might imagine monohulled, carbon fiber sailboats with a good sail rig and secret technology like a winged keel similar to the Australian America's Cup yachts of yore sailing like the wind in this age, but no.  A better rig would be the new multihull boats like a catamaran or the trimaran. Two types of sailboat configurations that are the fastest class of sailboats., whether with an engine, or with just wind power making them almost literally fly!  Even the America's Cup have adopted these sailboat types over the monohull sailboats of 3 decades ago, and they really are the fastest sailboats in the world. 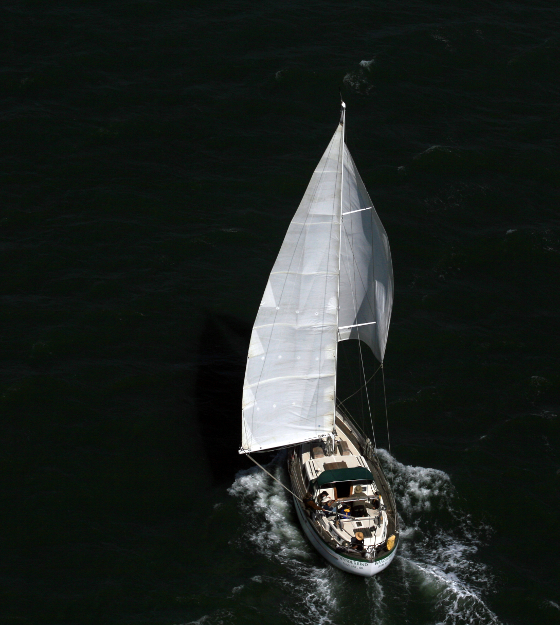 A monohull sailboat, with one hull sitting on the water,
most of its weight  right down the middle on its keel.
Monohull sailboats are the traditional type of boat structure for sailboats: with one physical hull sitting and staying afloat on the water and a mast for the sail, plus any technological advantage to help it sail even when winds are weak like a winged keel.

Multihulls are boats that sit on more than one hull, this time outriggers—like skates on the water, two for a catamaran, and for a trimaran the main middle hull plus two outriggers. 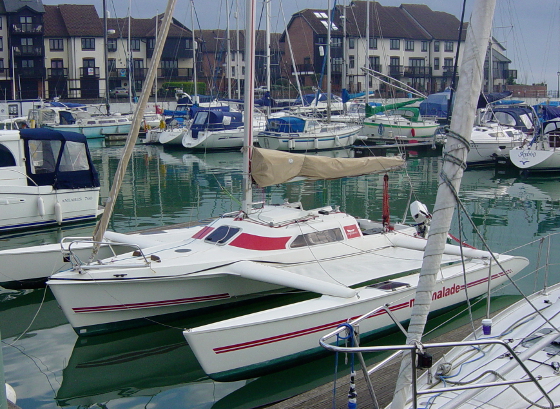 A trimaran, a multihull boat with three hulls sitting
in the water, giving it stability.
More sail area provides the wind more push for propelling the sailboat forward. But with more sail, a boat needs a bigger, heavier hull to keep the structure stable on the water or the sail would flip the boat over. Heavier hulls have more resistance and tend to slow the boat down.

The amount of sail that any boat can carry depends on the 'stiffness' of the hull, this comes from more beam and more weight low (ballast) down in the center towards a deep keel. Fast boats typically will have hulls made of light materials, like glass fibre, Kevlar carbon sandwich and fin keels with wings or the preferred bulb keels attached to let even moderate underwater currents propel the boat in lighter winds. 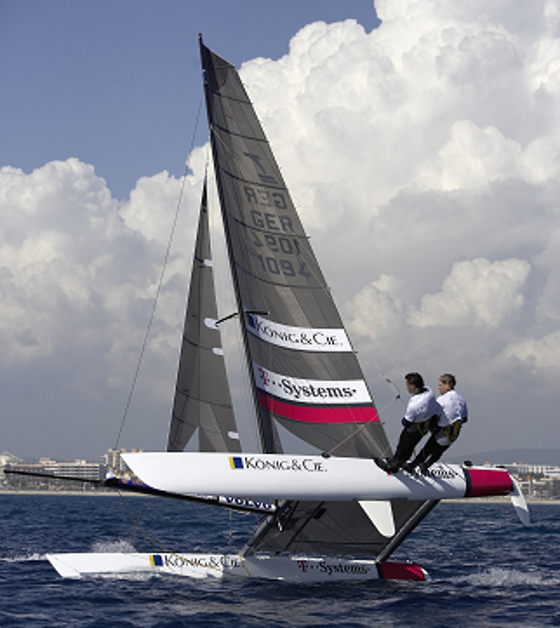 A Catamaran type sailboat with two outriggers on the water,
sailing faster as a lighter watercraft having less resistance to the water.
Multihulls even without any ballast can carry as much sail as a monohull of similar length. Fast monohulls sailboats like those raced at the America's Cup have wider decks and beams for more stability, and are lighter for less resistance.  A modern sail is usually curved, like a wing and the air traveling over the topside of the curved portion travels faster than that traveling on the underside to push the boat forward using the wind the way an airplane's wing lets the wind lift it up. 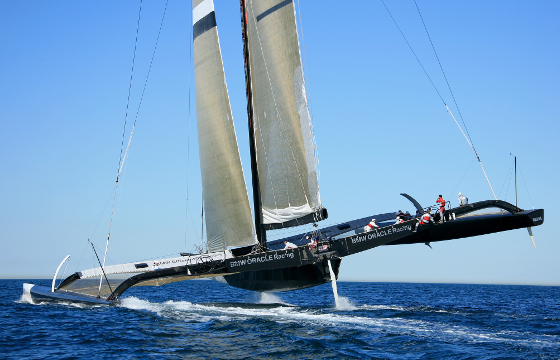 Trimarans and many different catamarans, are comfortable, faster and ultimately more seaworthy than the vast majority of monohull sailboats. Experienced sailors who have sailed both monohulls and multihull sailboats will tell you that catamarans and trimarans are better and faster boats.

A multi-hull boat is controllable in all sea and wind conditions and easy to sail, and can be helmedl "hands off" under all conditions, yet at the same time be able to tack fast, even under mainsail alone. Unlike monohulls which rely on a large crew for maximum performance, a catamaran can be sailed to its full potential by a crew of two.

A Multi-Hull Sailboat Is More Fun

An open deck catamaran, looks like a beach catamaran and with accommodation only in the hulls. Usually cheap to build, the boat can be moved as trailing rigs behind your land vehicle as you drive to the marina.

Trailer-sailer catamarans are typically twice as fast as the average small monohull and are very seaworthy despite their small size.

On a monohull boat you tend to sail as fast as possible all the time. On a catamaran you only sail as fast as you want to go. Good sailing on a catamaran or trimaran is knowing when to hold back and slow down. If you use land vehicles for comparing speed, 6 knots is 60mph, 8 knots is 80; 20 knots is 200. For multihulls, to average 9 knots means you’ll often be flying at 18 knots. Catamarans and trimarans need at least a Force 4 wind to sail at their best.

Ironically, while a multi-hull boat has room for store, it can’t take the weight without hampering safe sailing conditions.  On the other hand, a monohull has no room, but you can load it up.

Another simple build of a trimaran.  This will still outsail monohull
sailboats of the same weight and craft size.

Compared to a similar length monohull, a catamaran or trimaran will cost more to build. That’s because not only does it have a much greater surface area, but the entire boat has to be built by hand. Monohull boat builders put on 35% of the boats weight in the form of a cheap steel keel. Comparing cost to usable space, comfort and speed, a catamaran or a trimaran is the better value.

Sailing a faster boat is always the better seafaring option if you helmed any sailboat.

You can cover longer distances, in a shorter time and reach your destination quicker, even outrun trouble if a storm or typhoon build-up is forewarned by your local weather reports.