Home  »  Green-Minded  »  An Urban Bowery for your Lifeline

An Urban Bowery for your Lifeline

November 22, 2014 | By: Blessing       Green-Minded
An Urban Bowery in Every City
Planting Food Gardens and Fruit Trees in Green Spaces
We usually see marginalized families doing this:  planting crops or trees on a strip of fallow public land and living off the spare produce.  It might seem like such a desperate move for people to put food on the table on top of being almost homeless since they probably live in a ramshackle home nearby but planting food in public spaces is one very precious idea that helps everybody in a community.

The Concrete Gardener shows how the good stuff can be done and some of his photos from a visit to South Korea show how a people who are ingrained with the motivation and skills to be self sufficient with their own food can do amazing things: 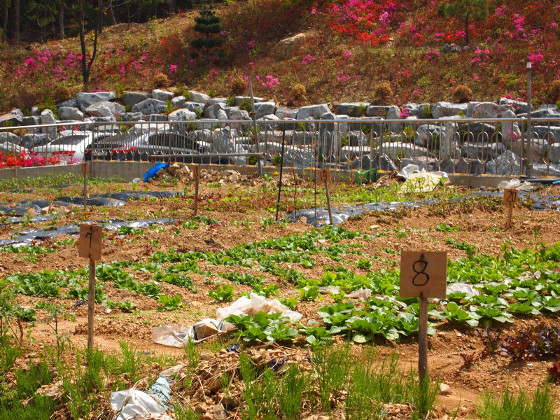 In places overseas, from Seattle to the Yorkshire in the U.K., to New Zealand, to Japan, the local government is allowing people and communities to use public land for planting food.  It is a simple yet beautiful idea that allows the community to make use of all the open green spaces for supervised cultivation. 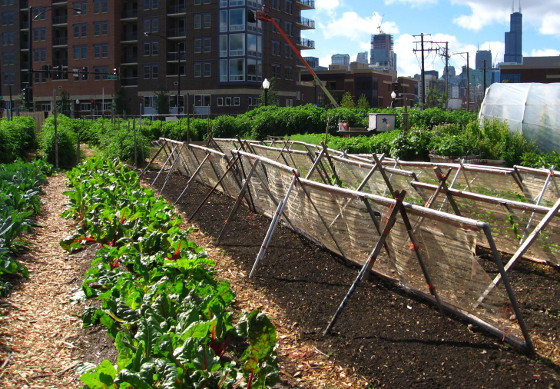 An Urban Farm in Chicago                Linda        Steve Walling           CC 2.0
In Yorkshire, Pam Warhurst, former council leader in Todmorden, has coaxed the locals into a volunteer team for planting vacant lots into food gardens, calling it The Incredible Edible movement.  Not only does the community get fresh produce for free, but surplus harvest can be offered to local food shops to help them lessen food expenses; sourcing their food needs locally from the urban gardens instead of buying stuff out of town.  Growing food close to home is the primary advantage of having any local green space converted into a tended urban food garden.  This U.K. town project has attracted people from as far as Down Under to learn the process: "People came from New Zealand and are now adopting edible spaces in the rebuilding of Christchurch," says Warhurst. The Incredible Edible movement has now spread to 30 other towns around the UK and overseas.

In the U.S., some towns and cities are allowing residents to replace grassy sprawls and lawns or ornamental landscapes with food gardens and orchards to provide free food for their residents.  Locals from any nearby community can pick what they need from the public produce garden anytime.

Other cities include Seattle and Des Moines Iowa, one providing vegetable garden and community space in a highway median strip as well as allowing fruit trees to be planted in public spaces around the city, and the other planting fruit and nut orchards around local parks, schools and community shelters.

Would you believe that an urban orchard park is actually named after Dr. Jose Rizal in Seattle, and the local Filipino volunteers there regularly maintain the remaining 54 apple and crabapple trees that remain in the park, and harvest for food donations (apple pies) to charities and for making apple cider too as well as free food for the locals!

In New York, a local company named Sunworks has the Science Barge which is a floating prototype urban farm and greenhouse lab showing how renewable energy can sustain urban food production.  Also afoot in New York are plans to create up to 100 Greenhouse Labs or urban food growing science labs to teach children about food and nutrition

The Greenhouse Lab project by New Yprk Sunworks,                        CC3.0
Urban gardens are part of a movement where people are returning to gardening and growing local food, motivated by health, environmental and economic reasons.

Food security can become a reality for any local community with open green spaces as long as the local government provides the greenlight for volunteers to set up food gardens for the local community.  Because food comes from within the neighborhood, you can get it for FREE, or even at a cheaper cost than getting produce shipped in from some distant farm and buying it at the supermarket.  Municipal orchards and vegetable gardens can even provide residents with new foods that for better nutrition and as a hedge against shortages from the national food supply grid.  No more worries about food cartels undermining government controls on price stability of food products.

The Window Farm Project in New York                                                   CC2.0
Another urban farming project being promoted for worldwide adoption is the WindowFarm project.  Resources are available on the group website teaching people how to build containers for growing food indoors, near windows, hydropnic systems and even artificial lighting constructs for real indoor food growing in urban areas.  It is a very dedicated advocacy group for sustainable food production within one's own place for everyone who chooses to have off-the-gird options for food sourcing.

The local urban food garden can even be the safest place in the neighborhood where the locals can meet up.
green minded, urban food gardens, produce gardens, converting the city landscape for food production, food security, urban off the grid ideas, grow your own food