July 12, 2014       On Higher Ground
The Story Behind ERAGON
A Homeschooled 15-year-old
Teaches Himself How to Write a Novel...
“Believe in the magic of stories to give you wonder...find something
special...from the other side of the looking glass.” ~Christopher Paolini 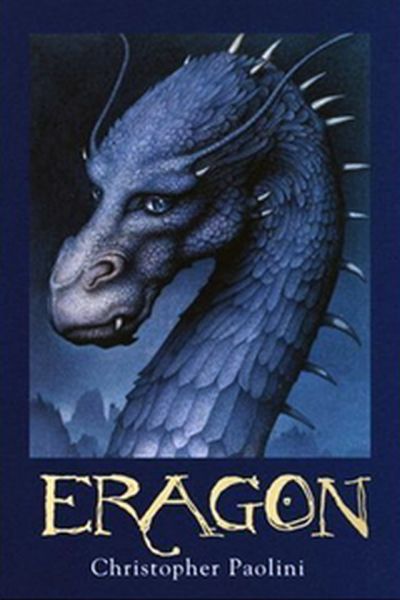 Are you Inspired to Write and Become a Novelist?

These days Wattpad is turning many dedicated young writers into overnight bestselling authors.  Writing has become a noble profession and activity locally, from out of nowhere.  And kids now goof off by writing stories, lots of them,  instead of really goofing off.  Before Wattpad, self-publishing was a controversial way of getting a book out.  There still is an iron curtain and an ivory tower of sorts, where publishing editors, who have a long and established method of screening the good from the bad, are turning their collective noses up at ambitious young writers who can bypass the system and publish their books on their own. 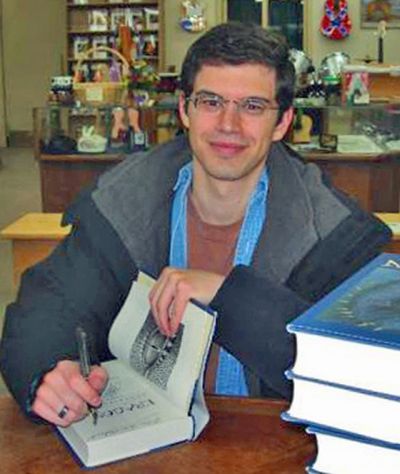 But among the most successful of those who beat the system was a spunky 15-year-old, homeschooled writer, Christopher Paolini, who wrote his first novel, Eragon, a book about Dragons that went on to become a beloved YA bestseller, as well as a cult fantasy movie by Disney.  His books, as of today, have sold over 31 million copies, ALL OVER THE WORLD.  Not bad.  Not bad at all.

Christopher Paolini was born on November 17, 1983. He grew up in the remote and majestic Paradise Valley, Montana, where he still lives a relatively secluded life with his family on the edge of the Yellowstone River.
His parents, Kenneth and Talita, met as members of the Church Universal and Triumphant, a survivalist Christian   group best known for their extensive mountainside complex of bomb shelters. Kenneth worked as a guard, while Talita was a teacher in the on-site Montessori school.
Kenneth and Talita Paolini homeschooled Christopher and his younger sibling, Angela because wanted their children to have time “to watch the clouds, to have thinking space,” and their lessons were tailored to cultivate each child’s interests. The Paolini family were frequent visitors to the nearby library where Christopher loved to lose himself in various books, from mysteries, to fantasy and science fiction as well as the classics.  The kid at one interview,  claims to have read 3,000 books and watched 4,000 videos, and says that he’s unbeatable at computer games, but he knows “nothing about math;” meaning he didn't devote much attention to it, unlike reading.
By high school age, Christopher and his sister Angela entered into the American School independent study program. Christopher finished the program at the age of 15 but decided to wait before continuing on to college at that young age.
Since he didn’t have anything else to do at the time, Christopher decided to take a shot at writing a novel for the heck of it.  It was a project coming together as a hobby at first, turned out to be the most inspiring and incredible learning experience not just for the young Paolini but for other kids who enjoy writing stories.
The young Paolini even made the effort to know all about blacksmithing iron to learn how to make knives, swords, and armor.

ERAGON:  The Magic of a Dedicated Homeschooled Writer

Christopher wrote an epic story about the adventures of Eragon, a 15-year-old farm boy, and a dragon named Saphira. The fantasy realm of Alagaesia may have been inspired by the dramatic landscape surrounding the Paolini home – broad sweeping valleys, dense forests, and the jagged Beartooth Mountains. 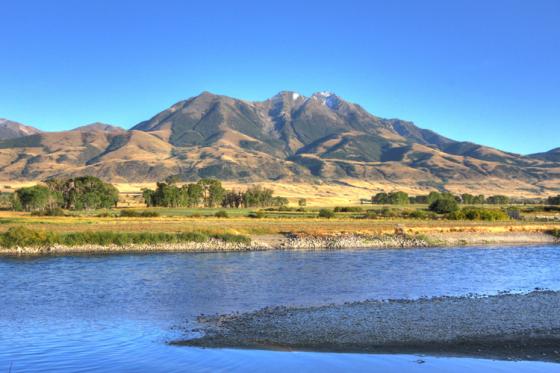 Paradise Valley, Montana --the area and views around
Christopher Paolini's home that inspired the world of ERAGON

Christopher learned the nuts and bolts of putting together a novel from instructional books about the craft of writing. He says, “I began educating myself with the Writers Handbook series, Characters and Viewpoint by Orson Scott Card, and most importantly, Story by Robert McKee. Though Story is intended for screenwriters, I found McKee’s principles and advice invaluable for structuring a novel.”
After that, Paolini, all fifteen-years-old of him, laid out  a nine-page plot outline for the entire Eragon book series, taking a year to write the first draft, then taking another sweet year revising.  He wanted a prose stylist manner of storytelling, “In my writing, I strive for a lyrical beauty somewhere between Tolkien at his best and Seamus Heaney’s translation of Beowulf.” Like a true geekfan of the bard, Christopher laid out invented languages for his own tale, basing the Elven language on Old Norse, while Dwarf and Urgal words were made up from scratch.
Fantasy reviews of the novel claim the story of Eragon to be heavily influenced by Tolkien’s Middle Earth, Anne McCaffrey’s Dragonriders, Bruce Coville’s Jeremy Thatcher Dragon Hatcher, Icelandic sagas, Beowulf, Le Morte d’Arthur, and even Star Wars. The snootier reviews claim the work is just derivative fanfiction, but in the end it was the readers who loved the book who ignored them trolls and got a really good YA read as part of their fantasy hoard.

Talita and Kenneth were inspired by their son’s imaginative well-written manuscript so they decided to self-publish it with their own company, Paolini International LLC (by then with 2 books under their belt).
The Paolinis spent a whole year editing Eragon as a family activity – proofreading, moving sentences around for a better read and checking continuity. Christopher drew the maps, interior artwork and original cover art, a dragon’s eye. As 2002 rolled around, the manuscript was finally sent to press. The first edition of Eragon was a paperback priced at $22.95 retail, and discounted to $14.00. Mint signed copies of the first edition Eragon are now worth thousands of dollars!
A Learning Program Built Around a YA Book

Promoting Eragon became the family business from then on.  Experts at book marketing, the Paolinis designed an educational program around Eragon that encouraged children to read and write. Travelling from town to town for over a year near where they lived, Christopher and his dad presented the Eragon learning program in schools, libraries, and bookstores. In presentations, Christopher would dress up in “a medieval costume” to promote the fantasy themed book. Amazingly, using smarts, good luck and a sound product, the Paolinis sold 10,000 copies this way.
Leveling Up:  Bestseller and Movie Deal

Christopher’s big break came when a student from one of the schools that bought his book package showed Eragon to his stepdad, Carl Hiaasen, author of Hoot and Flush. Hiaasen  liked the book so much and was impressed that a kid made it so he recommended the book to his publisher, Alfred A. Knopf, a division of Random House.  Knopf immediately went for a deal, acquiring the rights to the entire series, making Christopher an offer for a three-book deal.  Unheard of until then for a self-published indie.
With the deal made, Knopf assigned another editing of the novel and a new cover drawn by John Jude Palencar.
Knopf’s edition of Eragon was released on August 23, 2003 and shortly after, Christopher Paolini became a New York Times bestselling author, all 19-years-old of him. The bonanza highlight coming when an option for a Disney movie was offered, which was shown in 2006.
The sequel in the book series, Eldest, came out in August 2005 and also hit the #1 spot on the New York Times best-sellers list. The third book, Brisingr was published on September 20, 2008.
The Eragon Inheritance series is a Young Adult themed fantasy aimed at kids from 11-15, them tweens and teens who are coming of age like the main character. Even so, fantasy lovers of all ages are also devoted fans of the Eragon books. As a heroic fantasy to inspire kids, the book makes for that perfect bedtime book for parents and children. 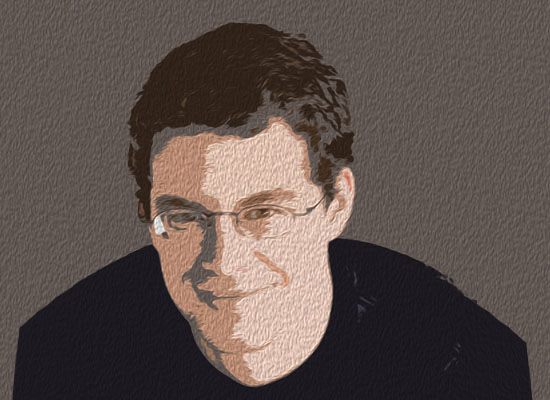 The Homeschooled Kid Living the Dream

Christopher Paolini is certainly an inspiration to homeschooled students everywhere. Like many homeschoolers, his 15 year old self wasn’t afraid to start big projects by teaching himself how to work out a solution through hard work and persistence—something most other kids learn later when they are out of school in the real world.  Christopher had the chance to hone his craft to a level that is not possible in just any structured, common school setting.

To date, Eragon and the Inheritance series have sold over 31 million copies ALL OVER THE WORLD.  Guys like Chris give hope to all kids who dream of doing well by writing stories and keeping faith in homeschooling.

Copyright Notice:  The ERAGON Book Covers are all copyright of Knopf.  Fair Use.