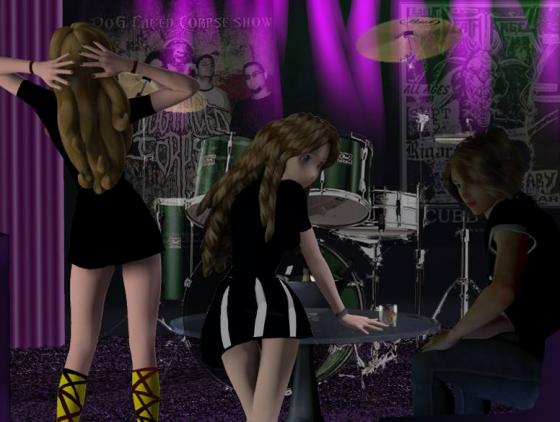 Mika seemed like a really nice kid to her.

Though she had this intense gaze when she was listening to her talk, Gisella just thought Mika was shortsighted and her glasses were not as good. Gisella thought of Mika as her bestfriend among the students by then.

She was sweet, and charming and very intelligent. She did not set up consultation sessions with her boyfriend teacher to drop her panties at him like the other hussies did but to really learn and learn well. She remembered having a girl crush herself on her beautiful high school teacher herself when she was younger and that teacher would be her role model for quite some time for carrying herself well and doing her job well too.

That high school teacher had even asked her out when she was in college already and she was rather surprised that their date went off as well as it did, even when she got kissed by her teacher before they parted ways after the date. Maybe Mika thought of her as some older sister and confidante among the older students on campus. It was good that she did and she was happy to have someone to inspire and have her do well with school.

The nightclub itself looked no different from any other. Except that it had killer lights, an unforgettable mural that had become the talk of the town, great food and drinks, and the best live bands.

Mika had been serving drinks and taking orders for almost an hour before taking a short break and joining Gisella at their table. Darrien had been walled off by a group of excited female students and he was doing his best to be friendly and accommodating to them. Gisella was smiling at her beau and signaled him not to be a snob and be nice to the kids and while he was busy, Gisella and Mika talked for a while.

“Swell place huh? Your mural is a National Heritage thing, everyone wants to see it. Uncle Reid even says the rival bars downtown are taking pictures of the wall and having their own shit painted on their walls. Hahahaha. Would you believe that?” , said Mika haltingly, trying to feel out whether Miz Ling was interested in small talk with a total goofball like her.

“It really looks good now that the acrylic has dried and the lights give it that surreal aura. It’s really nice. Thank you Mika for giving a chance to do something like this. I owe you one. The fried calamari tastes fantastic! This your uncle’s recipe?” , asked Gisella, who was pleased with everything about the new watering hole and hang out for kids who lived for live music and great chow and cheap booze.

“Oh, the food is the best whenever Uncle Reid does it himself. He used to cook at some LA restaurant for 10 years before going back here to put up his own business and nest egg and this is it—BLACK METALLIC.

And you don’t really owe me anything Miz Ling. Hey, I’ll get you and Darrien another order of calamari and fries on the house. Uncle asked me to get you a special treat for pulling in a lot of business with your mural, “ said Mika, more confident that her listener was at ease talking to her.

“Free food! Great, Mika! Thank your uncle from me and Darrien. Hey if you aren’t busy and would like to hang out sometime, I’m having a trip up Antipolo for the weekend to finish some paintings for my Masters exhibit. Maybe you’d like to come and shoot the breeze while I paint? “, asked Gisella.

“Really, Miz Ling? That would be so cool! I’d come anytime anywhere you’d ask me out. It’s a date even! Heehee. I’ll bring a book and a journal to write something while you paint. Then we can talk about anything. That’d really be nice. Antipolo it is then, “ cooed an excited Mika.

“Hahaha. A date it is then. See you,” smiled Gisella.

Mika couldn’t believe her ears from hearing Gisella ask her out and she risked being brazen enough to call it a date. Her tummy was floating with butterflies and she still couldn’t believe her luck. She was resigned to a fate of just seeing Miz Ling and Darrien at the BLACK METALLIC during weekends, when from out of nowhere this comes up.

She wondered if Miz Ling would mind if she decked herself out as the girl with the dragon tattoo like she usually did when she used to be GothFag Okudoy.

Naaah. Too much fuss for nothing.

Just hanging out with ‘Rinoa-chan’ in ripped jeans and a flannel shirt would do. She’d get uncle to cook something really special too. Woot! This was going to be some Antipolo trip.

The week before Mika would have her ‘Antipolo date’ with Miz Ling was spent wrapping up writing workshop assignments and revisions for previous submissions to creative writing classes.

It was a lot of work but Mika was inspired and she couldn’t wait for the school week to be over so she could pack her stuff for the day-long girl’s day out with her crush.

All the other girls in the school, them kikay nuts, kept trying to coax Prof Darrien to go on a group date with them to the Black Metallic as it was a special Ladies’ Night and the only guys who could come in were guests of women who would visit the bar that night. To everyone’s surprise, Darrien even agreed to go with a particular group of girls who became the envy of all the other witches scheming to get Prof Keljoran to come with them.

The librarian volunteer assistants were mighy surprised when Darrien agreed to hang out with them that night and all the pretty geeks of the group strutted around like proud peacocks smiling and giggling while the other girl troupes eyed them with disdain or even tried to bribe them into having a few ‘extra’ companions who’d join their group date with Prof Darrien.

Whatever fuss that would turn out, Mika knew Darrien would never be foolish enough to get lush or even try to get lucky with his fawning posse just because none of them were his type and but she knew she was his in an intuitive and conceited manner on her part because she had already plied her ‘landi’ at him and he was more than receptive to her preening for his attention and she only broke it off because she was sure that she could grab him for herself anytime but his girlfriend was really the person she had the hots for, and having him around too for seconds would just be a formality after she scored a homerun with ‘Rinoa-chan.’

Boy, was she really full of herself and totally diluted AND deluded that she could even be anything but a mote in the eyes of the prettiest couple on campus but she told herself that she ain’t got it if she can’t hack it. This weekend was sure to be one interesting girl’s day out for her.