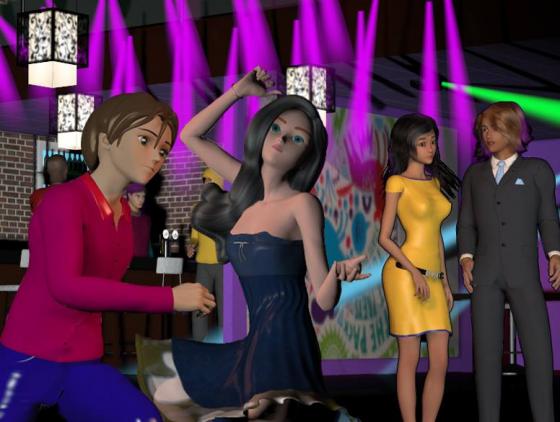 A week later, Gisella was busy finishing the huge wall mural project she got from Mika’s hippie Uncle Reid.  After getting suggestions and instructions from Mika’s uncle about some optical illusion surreal painting, she figured she’d paint a banshee hidden among a snowy forest that was also a white dragon if you looked at the painting a certain way.  Mika’s uncle was skeptical about the idea baut as soon as it was 70 per cent complete and he could see the illusion both ways he was more than happy to pay a little extra so that the mural would come out perfect and it came out absolutely awesome.  It was very feminine and sensual, it had this surreal theme challenging the onlooker to see both creatures of passion at the same time.

The nightclub was being rigged for all the lighting effects and the bar and kitchen had already been furnished and set up before the soft opening the weekend after and a dry run a week after that.  Mika’s uncle had the neon lighted sign put up in front shouting out BLACK METTALIC in lurid cursive.  Mike thought it was so dynamite that she could work part time there as waitress and even hang out there whenever she was free.  And knowing that it looked like some artsy watering hole, maybe even  ‘Rinoa Ling’ would spend time chilling at the place with Darrien and she could steal a few moments talking with her and just stealing a look at the hottest masters student at the college.

Gisella Ling had finished the mural  two days before but missed the opening of the club.  She heard it was packed with curious kids wanting to know what the gig was all about and goo word of mouth spread that the place was just the best in town and no one knew it was there so it was really the best place to be and that there was this mindboggling mural that looked better when you had downed a couple of drinks because you’d get to see both spooks hiding in the snowy forest painting.

Now Gisella and her beau Darrien were going to the BLACK METTALIC for some drinks.  Mika had told her that she was able to land a part time job as a waitress.  There was short queue outside the nightclub that evening.  Half were kids decked out in goth because the BLACK METALLIC was the closest place they could be in that played sad and noisy and danceable.  Others were grown ups wanting to check out a new bar in town.  Most of the patrons looked like they all studied or worked at the college town one way or the  other.

After paying the entrance fee and getting frisked by the doorman, the couple settled on a table where they had a good view of Gisella’s  optical illusion of a mural.  It looked exactly like all the kids had been babbling about.  Gisella was happy she did a good job for her friend Mika.  Mika seemed like a really nice kid to her.  Though she had this intense gaze when she was listening to her talk, Jaydee just thought Mika was shortsighted and her glasses were not as good.  Gisella thought of Mika as her best friend among the students by then.  She was sweet, and charming and very intelligent.  She did not set up consultation sessions with her boyfriend teacher to drop her panties at him like the other hussies did but to really learn and learn well.  She remembered having a girl crush herself on her beautiful high school teacher herself when she was younger and that teacher would be her role model for quite some time for carrying herself well and doing her job well too.  That high school teacher had even asked her out when she was in college already and she was rather surprised that their date went off as well as it did, even when she got kissed by her teacher before they parted ways after the date.  Maybe Mika thought of her as some older sister and confidante among the older students on campus.  It was good that she did  and she was happy to have someone to inspire and have her do well with school.